Athens, Mykonos & 4 nights cruise to the Greek islands and Turkey.

Departures on Tuesday, Wednesday and Thursday. 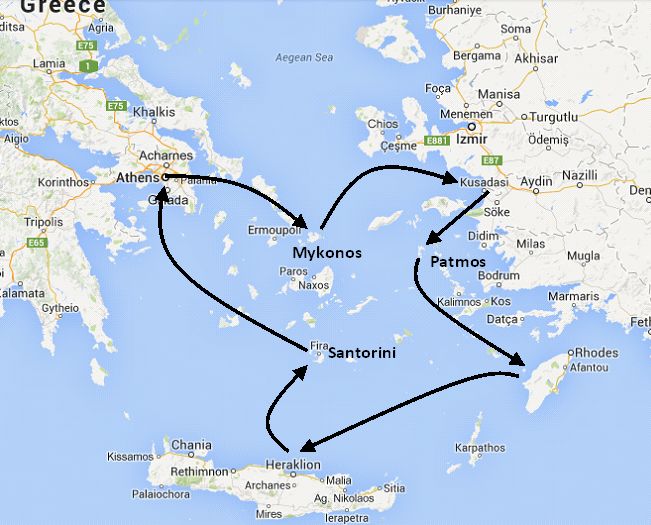 TUESDAY: ATHENS
Upon arrival, you will be met and transferred to your hotel. Balance of day at leisure.
WEDNESDAY: ATHENS GUIDED CITY TOUR
Morning sightseeing tour of Athens. The striking contrast between breathtaking monuments of a glorious past and modern elegant structures is what you will enjoy during your tour of Athens. Visit the Acropolis,the crowning beauty and glory of Ancient Athens, with its many monuments atop its rocky base, including the awesome Parthenon, the Propylea, the temple of Athena Nike and the Erechtheion, with its Porch of Maidens. Drive to the Roman Temple of Olympic Zeus, the Panathinaikon Stadium(site of the first modern Olympic Games in 1896), the Tomb of the unknown Soldier in front of the Parliament House on Constitution Square. See views of government buildings and elegant structures of the 19th century. Drive along Panepistimiou Avenue and view the Catholic Cathedral, the Academy, University, National Library. In contrast, conclude your tour with a visit to the new Acropolis museum (closed on Monday’s), a marvel of architecture with a full exhibition of the glory of Ancient Athens. Afternoon at leisure.
THURSDAY: ATHENS
Free day to explore Athens. Athens is a city where antiquity meets edginess. Museums and galleries abound, and new ones are in the works. The New Acropolis Museum, designed by the New York-based architect Bernard Tschumi, is now open at the foot of the ancient citadel. A major makeover prior to the 2004 Olympics added squares and pedestrian walkways, and new subway stations that double as museums. Today this ancient city is a vibrant megalopolis with nonstop nightlife, creative cuisine, and sites both ancient and modern. In the thousands of sidewalk cafés, courting teenagers, young professionals, and old men shuffling their worry beads all bask in Athens’s modern-day renaissance.
FRIDAY: ATHENS / MYKONOS
Morning transfer to the port to board the ferry to Mykonos. Upon your arrival on the island, transfer to your hotel.
SATURDAY & SUNDAY: MYKONOS
Days at leisure in Mykonos to enjoy this unique island. Mykonos island is a wonderful kaleidoscope of cosmopolitan shops, rocking bars, quaint windmills, great beaches, homey taverns and hidden churches all set against a brilliant blue backdrop. And it's not just the water that sparkles in the sun on Mykonos, but also the marble streets and beautiful white cubist buildings that characterize the island's architecture.
MONDAY: MYKONOS / CRUISE
Morning at leisure. In the afternoon transfer to the port to embark the cruise ship for your 4 day cruise to the Greek islands & Turkey.
TUESDAY: MORNING IN KUSADASI / EVENING IN PATMOS
Enjoy breakfast on board and the morning at leisure in Kusadasi (Ephesus, Turkey). Renowned for its beaches and attractive view of the Aegean, Kusadasi is near to several historical sites including Ephesus, the Temple of Artemis, and the House of the Virgin Mary. Spend the evening at leisure in Patmos (Greece). Sail to Rhodes this evening.
WEDNESDAY: FULL DAY IN RHODES
Enjoy a full day on the island of Rhodes (Greece), the largest island of the Dodecanese archipelago. Explore the island`s medieval Old Town, preserved in and around the walls of a Venetian castle, built by the 14th-century Knights of St. John. A UNESCO World Heritage Site, the Citadel of Rhodes is located at the far northern end of the island and is considered one of the best preserved medieval towns in the Mediterranean.
THURSDAY: MORNING IN CRETE / AFTERNOON IN SANTORINI
Arrive early this morning in Heraklion (Crete, Greece), one of the four prefectures that constitute the island of Crete. Enjoy a half day at leisure to explore the island on your own. At noon, cruise to Santorini, and enjoy an evening on Santorini Island. Known for its breathtaking caldera, Santorini is also famous for its sandy beaches, colorful sunsets, and whitewashed buildings along the sea-cliffs.
FRIDAY: PIRAEUS / ATHENS
Early morning return to Piraeus port. Disembark and transfer to the airport for your departure flight home.

from €1070
*per person rate, in a standard double room (3 star hotel) and an IB cabin type on cruise, for travel in the month of May
contact us:info@kivotostravel.com
package's locations:
packages's styles: