Visit Athens and Mykonos and enbark the 7 night cruise to the Greek islands & Turkey. 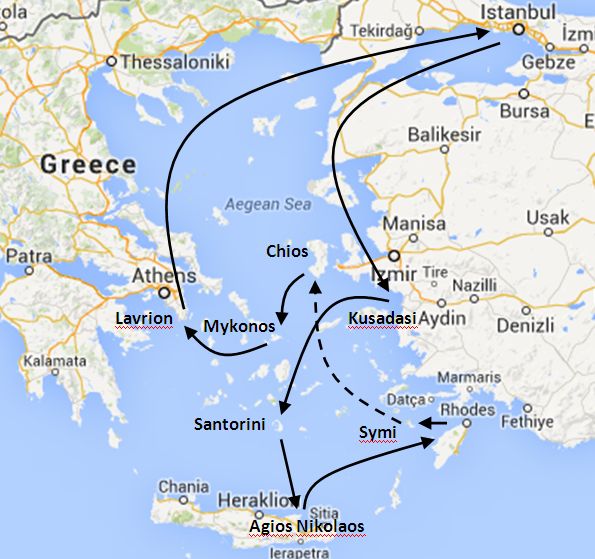 WEDNESDAY: ATHENS
Upon arrival, you will be met and transferred to your hotel. Balance of day at leisure.
THURSDAY: ATHENS GUIDED CITY TOUR
Morning sightseeing tour of Athens. The striking contrast between breathtaking monuments of a glorious past and modern elegant structures is what you will enjoy during your tour of Athens. Visit the Acropolis,the crowning beauty and glory of Ancient Athens, with its many monuments atop its rocky base, including the awesome Parthenon, the Propylea, the temple of Athena Nike and the Erechtheion, with its Porch of Maidens. Drive to the Roman Temple of Olympic Zeus, the Panathinaikon Stadium(site of the first modern Olympic Games in 1896), the Tomb of the unknown Soldier in front of the Parliament House on Constitution Square. See views of government buildings and elegant structures of the 19th century. Drive along Panepistimiou Avenue and view the Catholic Cathedral, the Academy, University, National Library. In contrast, conclude your tour with a visit to the new Acropolis museum (closed on Monday’s), a marvel of architecture with a full exhibition of the glory of Ancient Athens. Afternoon at leisure.
FRIDAY: ATHENS / CRUISE
In the morning, transfer to Lavrion port to embark the cruise ship for your 7 day cruise to the Greek islands & Turkey.
SATURDAY: DARDANELLES STRAIT / ISTANBUL
In the morning, arrival at the mystic city of Istanbul. A full day in Istanbul with the graceful minarets of countless mosques. Istanbul's blend of East & West has resulted in some of the most magnificent architecture in the world, including the Agia Sophia, the Blue Mosque and the Topkapi Palace. Explore this ancient city by participating in one of the optional tours and bargain for your own treasures at one of the 5.000 shops of the famous Grand Bazaar. Sail for Kusadasi at 7pm.
SUNDAY: KUSADASI (EPHESUS)
Afternoon arrival in Kusadasi (Ephesus, Turkey). Renowned for its beaches and attractive view of the Aegean, Kusadasi is near to several historical sites including Ephesus, the Temple of Artemis, and the House of the Virgin Mary.
MONDAY:  SANTORINI
Arrive this morning in Santorini, and enjoy a full day on this beautiful and unique island (10:00am to 6:30 pm). Known for its breathtaking caldera, Santorini is also famous for its sandy beaches, colorful sunsets, and whitewashed buildings along the sea-cliffs.
TUESDAY: CRETE (AGIOS NIKOLAOS)
In the beautiful town of Agios Nikolaos you will experience the warm Cretan hospitality and have the chance to visit the scenic villages of the prefecture of Lasithi, the monasteries and the famous islet of Spinalonga.
WEDNESDAY: MORNING IN RHODES / AFTERNOON IN SYMI
Early morning arrival in the beautiful island of the Roses. On a hill above the charming town of Lindos rises and ancient Acropolis. Below lies the bay of St. Paul. The crusading knights of St. John left the medival city of Rhodes behind when they were defeated by Sultan Suleyman the Magnificent. The presence of the Ottoman Turks is marked with their minarets, mosques and Turkish bath. An optional tour not to be missed. Afternoon arrival in the charming islet of Symi, whose capital resembles a theatrical stage. A stage filled with traditional settlements, mansions and a rich maritime history.
THURSDAY: MORNING IN CHIOS / AFTERNOON IN MYKONOS
Early morning arrival in Chios island, the fifth largest of the Greek islands. Chios, which is allegedly the birthplace of Christopher Columbus, Homer and many others, is the most divinely fragrant island of eastern Aegean, with the mastic trees and the vineyards, the well preserved medieval villages and the lovely, secluded, pristine beaches. In the afternoon, arrival at the famous island of Mykonos. Upon arrival in Mykonos, disembark and transfer to your hotel in Mykonos.
FRIDAY & SATURDAY:  MYKONOS
Days at leisure to enjoy the sun and the sundy beaches. See up close the iconic windmills, take a stroll in the narrow cobblestoned streets that lead to traditional settlements and the port, see the dazzling white, boxy houses, Little Venice and the ever famous Cycladic sunset.
SUNDAY: SANTORINI / ATHENS
At the indicated time you will be transferred to the airport for your flight to Athens.