Classical Greece shows Greece at its best: The beautiful whitewashed Cycladic Islands of Santorini and Mykonos, Crete the largest and southern- most Greek Island and the Peloponnese with Monemvassia and Nafplion and their historical treasures. Add to these destinations the less know and quaint islands of Kythira -will probably see turtles swim inside the port of Kythira where we will be docking for the night -and Hydra, a summer destination for the Athenians 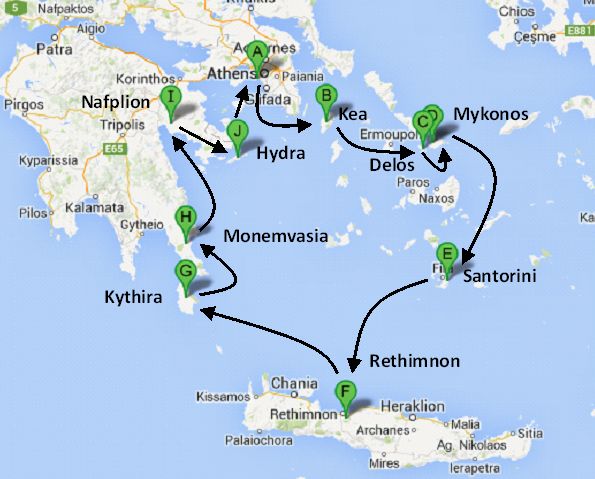 WEDNESDAY: ATHENS
Upon arrival, you will be met and transferred to your hotel. Balance of day at leisure.
THURSDAY: ATHENS GUIDED CITY TOUR
Morning sightseeing tour of Athens. The striking contrast between breathtaking monuments of a glorious past and modern elegant structures is what you will enjoy during your tour of Athens. Visit the Acropolis,the crowning beauty and glory of Ancient Athens, with its many monuments atop its rocky base, including the awesome Parthenon, the Propylea, the temple of Athena Nike and the Erechtheion, with its Porch of Maidens. Drive to the Roman Temple of Olympic Zeus, the Panathinaikon Stadium(site of the first modern Olympic Games in 1896), the Tomb of the unknown Soldier in front of the Parliament House on Constitution Square. See views of government buildings and elegant structures of the 19th century. Drive along Panepistimiou Avenue and view the Catholic Cathedral, the Academy, University, National Library. In contrast, conclude your tour with a visit to the new Acropolis museum (closed on Monday’s), a marvel of architecture with a full exhibition of the glory of Ancient Athens. Afternoon at leisure.
FRIDAY: ATHENS / MARINA ZEA / KEA ISLAND
In the afternoon, transfer to Zea port to embark the yacht for your 7 night cruise
2:00-3:00 pm embarkation in Marina Zea. Depart via Cape Sounion to Kea. Time at leisure to explore Kea’s tiny port, Korrisia after dinner. Departure in the early hours for Delos. Overnight at sea.
SATURDAY: DELOS (anchorage) - MYKONOS
Optional morning tour to the unique archaeological site of Delos, antiquity’s most sacred island. On to the port of Tourlos in Mykonos, with a swim stop on the way. Free afternoon and evening to enjoy the island’s cosmopolitan lifestyle. Overnight in Mykonos.
SUNDAY: SANTORINI
Noon arrival in Santorini (anchorage at Fira). Experience the stunning natural drama of the volcanic caldera. Optional tour to archaeological sites and typical villages with unique views over the Aegean Sea. Overnight sailing to Crete.
MONDAY: RETHYMNON, CRETE
Morning arrival at Crete’s famous and lively port of Rethymnon. Optional tour to the ancient city of Knossos near Heraklion. Late departure for Kythira. Overnight at sea.
TUESDAY: KYTHIRA
Late morning swim stop and afternoon arrival to Kythira, a less known island gem now fast becoming a favourite among visitors to Greece. Evening at leisure to visit the picturesque main town of Chora and experience the subdued charms of this peaceful island. Overnight in Kythira.
WEDNESDAY: MONEMVASIA - NAFPLION
Early morning sailing to Monemvassia. Discover a remarkable medieval fortified town, with time at leisure to explore the uniquely preserved Byzantine and Venetian architecture and experience the beauty of the natural setting. Depart for Nafplion in the early afternoon, with a swim stop on the way. Evening arrival at Nafplion. The old quarter is charming, with narrow streets and characteristic period architecture. Also, impressive medieval fortifications can be seen in the port and crowning the hills above. Overnight in Nafplion.
THURSDAY: NAFPLION - HYDRA or SPETSES
Optional tour to Mycenae, the powerful walled palace of Agamemnon, the Homeric Achaean king. Early afternoon departure for the island of Hydra. Time at leisure to explore this picturesque port town. Overnight in port.
FRIDAY: MARINA ZEA, PIRAEUS
Departure in the early hours for Marina Zea, Piraeus. After breakfast on board, disembarkation and transfer to the airport for your departure flight home.