Visit Athens and combine a cruise to the Greek islands with a tour to the mainland of Greece. 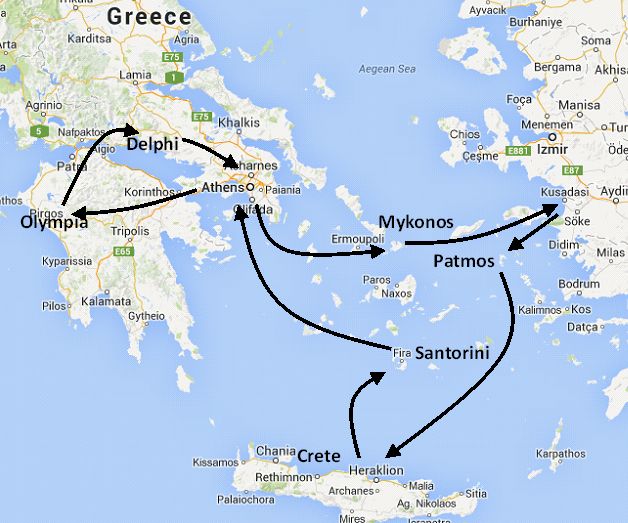 DAY 1: ATHENS
Upon arrival, you will be met and transferred to your hotel. Balance of day at leisure.
DAY 2: ATHENS GUIDED CITY TOUR
Morning sightseeing tour of Athens. The striking contrast between breathtaking monuments of a glorious past and modern elegant structures is what you will enjoy during your tour of Athens. Visit the Acropolis,the crowning beauty and glory of Ancient Athens, with its many monuments atop its rocky base, including the awesome Parthenon, the Propylea, the temple of Athena Nike and the Erechtheion, with its Porch of Maidens. Drive to the Roman Temple of Olympic Zeus, the Panathinaikon Stadium(site of the first modern Olympic Games in 1896), the Tomb of the unknown Soldier in front of the Parliament House on Constitution Square. See views of government buildings and elegant structures of the 19th century. Drive along Panepistimiou Avenue and view the Catholic Cathedral, the Academy, University, National Library. In contrast, conclude your tour with a visit to the new Acropolis museum (closed on Monday’s), a marvel of architecture with a full exhibition of the glory of Ancient Athens. Afternoon at leisure.
DAY 3: ATHENS / OLYMPIA
Starting from Athens we drive westwards along the scenic coast, until we reach the CORINTH CANAL with its breathtaking views (Short Stop). The Corinth Canal is a junction of international sea transport and serves ships coming from the western Mediterranean and Adriatic en route to eastern Mediterranean and black sea ports and vice-versa. Continue along the coastal road of the Saronic Gulf to EPIDAURUS (Visit). On the headland called "Nesi" at Palaia Epidaurus, the theatre of the ancient city is quite well-preserved, in the shape it acquired during the latter years of its function. Apart from a few rows of seats, the cavea is made of limestone with poros staircases. The theatre is marvelled for its exceptional acoustics, which permit almost perfect intelligibility of unamplified spoken word from the proscenium or scene to all 12,000 spectators, regardless of their seating. Then depart for  NAUPLIA 1st capital of Greece in 1829 (Short Stop) drive to MYCENAE (Visit)  “Mycenae 'Rich in Gold', the kingdom of mythical Agamemnon, first sung by Homer in his epics, is the most important and richest palatial centre of the Late Bronze Age in Greece. Its name was given to one of the greatest civilizations of Greek prehistory, the Mycenaean civilization.”  In the afternoon depart for OLYMPIA – Dinner & Overnight in OLYMPIA
DAY 4: OLYMPIA / DELPHI
Olympia the most celebrated sanctuary of ancient Greece, Dedicated to Zeus, the father of the gods, it sprawls over the southwest foot of Mount Kronios, at the confluence of the Alpheios and the Kladeos rivers, in a lush, green landscape. Although secluded near the west coast of the Peloponnese, Olympia became the most important religious and athletic centre in Greece. Its fame rests upon the Olympic Games, the greatest national festival and a highly prestigious one world-wide, which was held every four years to honor Zeus.  Visit the Archaeological Site & the Museum and then drive via PATRAS to RION, across the channel to ANTIRRION on the “State of the Art” new suspended bridge considered to be the longest and most modern in Europe. Arrive in NAFPAKTOS then continue to DELPHI – Dinner & Overnight in DELPHI.
DAY 5: DELPHI / ATHENS
Situated at the foot of Mount Parnassos, within the angle formed by the twin rocks of the Phaedriades, lies the Pan-Hellenic sanctuary of Delphi, which had the most famous oracle of ancient Greece. Delphi was regarded as the centre of the world. According to mythology, it is here that the two eagles sent out by Zeus from the ends of the universe to find the navel of the world met. The sanctuary of Delphi, set within a most spectacular landscape, was for many centuries the cultural and religious centre and symbol of unity for the Hellenic world and seat of the Pythian Games, the second most important games in Greece after the Olympics, which were held every four years.
Visit of the archaeological site and the Museum where one can see among other archeological treasures, the unique bronze statue of the Charioteer dedicated to Apollo by Polyzalos, the tyrant of Gela, in 478 B.C. when he won the chariot-race at the Pythian Games. This incomparable statue is a representative example of the ''severe'' Attic style, certainly the work of a major artist.
After visits 2 hours at leisure & then start the drive back to ATHENS
DAY 6: ATHENS / CRUISE / MYKONOS
Morning transfer to Piraeus port to embark the cruise ship for your 3 day cruise to the Greek islands & Turkey. Cruise to Mykonos and enjoy the evening on this lively island.
DAY 7: MORNING IN KUSADASI / EVENING IN PATMOS
Enjoy breakfast on board and the morning at leisure in Kusadasi (Ephesus, Turkey) from 7:00 am to noon. Renowned for its beaches and attractive view of the Aegean, Kusadasi is near to several historical sites including Ephesus, the Temple of Artemis, and the House of the Virgin Mary. Spend the evening at leisure in Patmos (Greece) from 4:00 pm to 9:00 pm.
DAY 8: MORNING IN CRETE / EVENING IN SANTORINI
In the morning we arrive at the port of Heraklion in Crete, the largest of the Greek islands and the birthplace of Zeus - king of the ancient Gods. (optional tour to Knossos Palace and its museum). We then sail to Santorini island arriving in the afternoon. Time to enjoy this beautiful and unique island (16:30 to 21:00). Known for its breathtaking caldera, Santorini is also famous for its sandy beaches, colorful sunsets, and whitewashed buildings along the sea-cliffs.
DAY 9: PIRAEUS / AIRPORT
Early morning return to Piraeus port. After breakfast on board, disembarkation and transfer to the airport for your departure flight home.

from €960
*per person rate, in a standard double room (3 star hotel) and an IB cabin type on cruise, for travel in the month of May
contact us:info@kivotostravel.com
package's locations:
packages's styles: