Combine a visit to Athens with a Classical Greece tour and a Greek island & Turkey cruise. 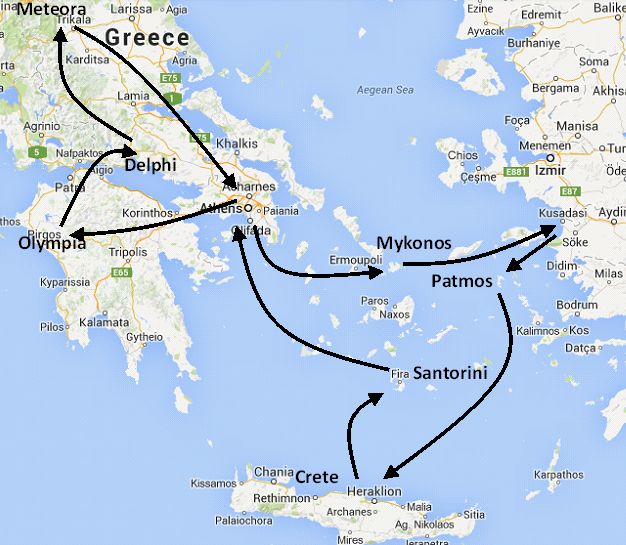 DAY 1: ATHENS
Upon arrival, you will be met and transferred to your hotel. Balance of day at leisure.
DAY 2: ATHENS GUIDED CITY TOUR
Morning sightseeing tour of Athens. The striking contrast between breathtaking monuments of a glorious past and modern elegant structures is what you will enjoy during your tour of Athens. Visit the Acropolis,the crowning beauty and glory of Ancient Athens, with its many monuments atop its rocky base, including the awesome Parthenon, the Propylea, the temple of Athena Nike and the Erechtheion, with its Porch of Maidens. Drive to the Roman Temple of Olympic Zeus, the Panathinaikon Stadium(site of the first modern Olympic Games in 1896), the Tomb of the unknown Soldier in front of the Parliament House on Constitution Square. See views of government buildings and elegant structures of the 19th century. Drive along Panepistimiou Avenue and view the Catholic Cathedral, the Academy, University, National Library. In contrast, conclude your tour with a visit to the new Acropolis museum (closed on Monday’s), a marvel of architecture with a full exhibition of the glory of Ancient Athens. Afternoon at leisure.
DAY 3: ATHENS / OLYMPIA
This morning we depart for Corinth to start our 4-day Classical Tour. Stop at the Corinth Canal. Drive to Epidarus to visit its theatre, known for its remarkable acoustics and then on to  Nauplia (short stop). Continue on to Mycenae to visit the beehive tombs and the citadel. Then depart for Olympia through the central Peloponnese area, passing the cities of Tripolis and Megalopolis to arrive in Olympia for dinner and overnight.
DAY 4: OLYMPIA / DELPHI
In the morning visit the ancient home of the Olympic Games and the fascinating Museum. Then drive via Patras and Rion, take the new bridge to Antirion to continue to Delphi through Nafpaktos. Arrive in Delphi in early evening. Dinner, overnight.
DAY 5: DELPHI / METEORA
This morning visit the Archaeological site and the Museum of Delphi.  Walk the Sacred Way, visit the temple of Apollo, the theatre and the stadium on the mount Parnassos and then on to the Museum housing some masterpieces of the Greek sculpture such as the famous bronze statue of the "Charioteer". Depart for Meteora. Drive through Lamia, Trikala and arrive in Kalambaka in early evening. Dinner, overnight.
DAY 6: METEORA / ATHENS
In the morning, visit the breathtaking site of Meteora. Visit of two Monasteries.  After lunch drive to Athens via Thermopylae (short stop). Arrive in Athens in early evening. Overnight Athens.
DAY 7: ATHENS / CRUISE / MYKONOS
Morning transfer to Piraeus port to embark the cruise ship for your 3 day cruise to the Greek islands & Turkey. Cruise to Mykonos and enjoy the evening on this lively island.
DAY 8: MORNING IN KUSADASI / EVENING IN PATMOS
Enjoy breakfast on board and the morning at leisure in Kusadasi (Ephesus, Turkey) from 7:00 am to noon. Renowned for its beaches and attractive view of the Aegean, Kusadasi is near to several historical sites including Ephesus, the Temple of Artemis, and the House of the Virgin Mary. Spend the evening at leisure in Patmos (Greece) from 4:00 pm to 9:00 pm.
DAY 9: MORNING IN CRETE / EVENING IN SANTORINI
In the morning we arrive at the port of Heraklion in Crete, the largest of the Greek islands and the birthplace of Zeus - king of the ancient Gods. (optional tour to Knossos Palace and its museum). We then sail to Santorini island arriving in the afternoon. Time to enjoy this beautiful and unique island (16:30 to 21:00). Known for its breathtaking caldera, Santorini is also famous for its sandy beaches, colorful sunsets, and whitewashed buildings along the sea-cliffs.
DAY 10: PIRAEUS / AIRPORT
Early morning return to Piraeus port. After breakfast on board, disembarkation and transfer to the airport for your departure flight home.

from €1100
*per person rate, in a standard double room (3 star hotel) and an IB cabin type on cruise, for travel in the month of May
contact us:info@kivotostravel.com
package's locations:
packages's styles: